A Look Back At SNA's 44th Annual Legislative Action Conference

Five Heartlanders attended the 44th Annual Legislative Action Conference (LAC) held on February 28-March 1, 2016 in Washington, D.C.  Child Nutrition Reauthorization was the primary focus of this year’s conference.  As discussed in this blog, the Child Nutrition and WIC Reauthorization Act authorizes all of the federal school meal and child nutrition programs, which provide funding to ensure that low-income children have access to healthy and nutritious foods. 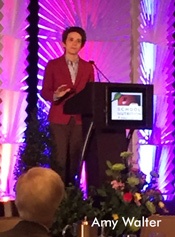 To provide some information and perspective on the current political climate, the conference kicked off with Amy Walter, national editor of the Cook Political Report and the former political director of ABC News.  Amy told the group that this Presidential race is unlike any she has covered in her 20 years of political reporting.  For example, at the time of the conference, it appeared Donald Trump and Hillary Clinton would win their party’s nominations.  When you take into account net favorable ratings (favorable ratings less unfavorable ratings), Clinton is at -13 while Donald is at -31. Traditionally when a new president starts out, the favorable rating is positive. Amy also hit upon a recurring theme of the conference - given the election year, legislative time is precious and that includes work on Child Nutrition Reauthorization.

At every LAC, SNA publishes its position paper, which is based on feedback from SNA members throughout the year and culminates in 4-5 key talking points that arm SNA members as they “charge the hill” on Tuesday.  The first point related directly to the theme of the conference:

Additional points from the paper captured concerns about:

One of the top sessions at LAC was the Capitol Hill Roundtable: Perspectives from Congressional Staff.  This panel included Chairman and ranking member staff from Senate Committee that has Child Nutrition jurisdiction (Agriculture, Nutrition, and Forestry Committee) and Chairman and ranking member staff from the House committee (Education & Workforce).  The two staff members from the Senate were pleased that a bi-partisan compromise had been reached and the bill was being prepped for floor action. That bill in its current form has the support of SNA, National School Boards Association, USDA, and most importantly the White House.

Highlights of that bill include:

Of particular importance was a quote shared with attendees from the Chairman of the Senate Committee, Pat Roberts (R) from Kansas mentioning that he and ranking member Debbie Stabenow (D) Michigan "wouldn't present the bill to leadership for consideration if it caused a budget deficit."

In addition to the legislative sessions, SNA hosted an Industry Exchange session that included six students who provided feedback on eating preferences, school lunch, technology, and the new meal standards.  These students ranged in age from high school to middle school.  This was a tremendously valuable session for us and for all of the other industry members who attended.

A couple of takeaways from that session included:

We took detailed notes and are considering how the feedback from the panel might be integrated into future products and services for our district customers.